Dealing with Problematic Employees in Workplace

Dealing with Problematic Employees in Workplace

It is inevitable in your role as a manager that you will have to deal with employees who earn the label “difficult.” Instead of ignoring the situation as many managers do, it is essential for you to take action to remedy the problem. After all, you own forming and maintaining an effective working environment.

Effective managers use a deliberate approach similar to planning and delivering a constructive feedback discussion, for dealing with difficult employees.

Focus on the behaviors

It usually develops over time and seldom from a single incident. As a manager, it is your responsibility to be alert to the early warning signs and deal with the underlying causes before the situation reaches a crisis.

Most managers will spend months, even years, complaining about poor employees… and not ever giving them actual feedback about what they need to be doing differently.  Yes, giving tough feedback is one of the most uncomfortable things a manager has to do.  But great managers learn to do to it reasonably well, and then they do it.

Ask yourself: “If you’re Responsible?”

Don’t focus only on the evident behavior

When confronted by an angry employee, it’s easy to attack the person and target the behavior rather than examine the factors that underlie the behavior. Often, this takes patience, careful probing, and a willingness to forgo judgment until you really understand the situation. 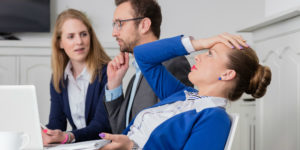 When an employee is obviously reluctant to communicate, it’s almost a sure sign that more lurks beneath the surface. Often, employees will withhold because they feel unsafe. They may test the waters by airing a less severe or kindred issue in order to see what kind of a response they get. In order to get the full story and encourage forthrightness, it’s imperative that the manager read between the lines and offer the concern and support necessary to get the employee to open up.

Clarify before your confront

Chances are, when issue first surfaces, you will be given only a fragmentary and partial picture of the problem. You may have to dig deep to surface important facts, and talk to others who may be involved. One safe assumption is that each person will tend to present the case from his or her viewpoint, which may or may not be the way it really is. Discretion and careful fact-finding are often required to get a true picture.

This isn’t easy, even if you have reason to believe it’s so, because you may not be fully aware of what you have done to fuel the fire. Three helpful questions to ask yourself: “Is this problem unique, or does it have a familiar ring as having happened before?”, “Are others in my organization exhibiting similar behaviors?”, and finally, “Am I partially the cause of the behavior I am criticizing in others?”

Firing someone is the hardest thing a manager has to do.  If it gets to that point, do it right. Don’t make excuses, don’t put it off, and don’t make someone else do it.  The best managers do the tough things impeccably.

How to Quit Your Job Without Burning Bridges

Get The Job You Want Using These 7 Interview Tips